While the Ford government’s Bill 124 unlawfully capped wage increases to one per cent for three years, preventing the union from negotiating wage increases commensurate with inflation, the bargaining team achieved improvements in other areas of their contract.

Make sure to read Jake’s first update as our support staff representative on Georgian’s Board of Governors.

Local 349 held a General Membership Meeting and elections on Wednesday, Feb. 16. The following were elected as the new executive:

Congratulations to the new executive!

The bargaining team for OPSEU/SEFPO employees in the CAAT-S PT Division is eager to begin the ratification process on the tentative agreement reached with the College Employer Council (CEC) on June 25. The date for a ratification vote will be announced soon. Read more . . . 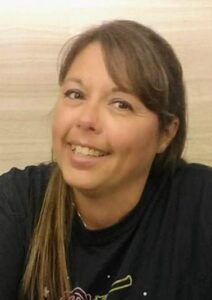 Congratulations to Georgian’s Lisa Lavigne who was elected Chair of the Part-time Support Staff Bargaining Team.

Part-time college support workers from across the province met virtually Nov. 6 to 7 to set the stage for negotiating their collective agreement by looking at issues, sharing stories and electing a new bargaining team.

OPSEU/SEFPO President Warren (Smokey) Thomas says the government’s plan to change the way colleges are funded will lead to lower-quality education, job cuts, and the outright disappearance of essential programs throughout the province.

“Just like Walmart decimated the main streets of so many Ontario communities and the livelihoods of so many workers, this plan will destroy Ontario’s beloved college system,” says Smokey. “The Minister is forcing the colleges to focus on fighting each other instead of providing the best education to as many students as possible.  READ MORE . . .

After a long and difficult round of negotiations, your bargaining team has achieved a tentative agreement for College Support Part-time workers. This historic moment is a game-changer for all of us, and everyone who follows in our footsteps at Ontario Colleges. Read more . . .

THE RIGHT THING FOR STUDENTS WORKING PART-TIME IN COLLEGE SUPPORT

Duncan McFarlane is a student working part-time in college support. He understands what it means to be a student worker and shares some of the details of the survey that student workers in the Colleges recently told us that they wanted in their first collective agreement. 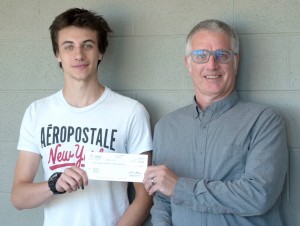 Congratulations to Luke Bonsi, a first-year Electrical Engineering Technology student at Georgian’s Barrie Campus, who won a $1,200 scholarship this year from the Colleges of Applied Arts and Technology (CAAT) Scholarship Fund.

The CAAT support staff division offers annual scholarships to full-time students at any of the 24 colleges. This year, five $1,200 scholarships were given out.

Students have to submit an essay based on topics ranging from the importance of unions to bullying and harassment.

This is the second time a Georgian student has won one of the scholarships. Last year, Alessandro Simonetti, a student from the Owen Sound Campus, won a scholarship. Local 349 steward, Kailey Hawkins, presented Alessandro with his cheque. 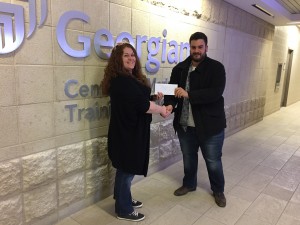 You may have already seen this fun video that aired during the opening ceremonies of the recent Winter Olympics. If not, enjoy!

And if you love the video, you can also buy the t-shirt!